Charli and the iceberg effect! 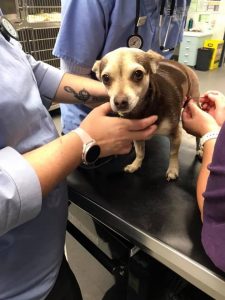 Sweet Charli presented to our Emergency & Critical Care Service after she was attacked by a neighbourhood dog. The attack was over quickly and whilst Charlie did not appear to have any significant injuries, her diligent owner brought her straight in for examination, and boy was Charlie lucky she did!
Charli was immediately triaged to our treatment area where she was treated for pain & mild shock and promptly started on antibiotics for the few minor puncture wounds that were visible. But despite having only minimal external injuries, what lay under the surface told a very different story.
Charli had an opening in her abdominal wall which could be felt just under the skin. She also had a swelling on top of her spine, initially thought to be associated with soft tissue swelling from a small puncture wound over this area.
A trauma ultrasound was performed which revealed that the swelling was not inflamed tissue at all but her left kidney (and spleen!) which had been forced out of the hole in her abdominal wall, secondary to the pressure from a bite, and remained trapped between her skin and spine! 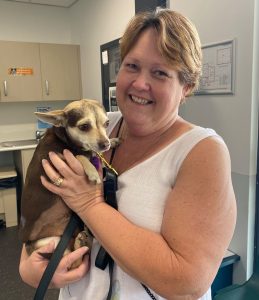 Once stabilised, Charli underwent an emergency surgery to remove her left kidney which was no longer attached to its blood supply and to replace her spleen back into her abdomen where it belonged. She also had multiple internal lacerations that required extensive stitching.
Charli is a perfect example of why dog attack wounds are referred to as the “tip of the iceberg”. The skin is a tough organ designed to protect us from injury.
It can withstand far greater forces than the muscles and organs can, and thus it is not
uncommon that the internal injuries are far greater than expected. As a results of this, we always recommend prompt veterinary attention for any animal that has been attacked by a dog.
Luckily, Charli went on to make a remarkable recovery! Within two days of surgery, she was eating, drinking and walking around the clinic lapping up TLC.
Charli has continued to make an amazing recovery and is pictured here at her recheck with her dedicated & very relieved mum!
View all news